The second issue of the Czech Mint's cycle dedicated to the Seven Wonders of the Ancient World, commemorating the Hanging Gardens of Babylon. This special product will be especially appreciated by investors. The whole package contains one troy ounce of gold, but divided into ten identical coins. At the moment when you want to monetize only a part of your investment, you can break the package and sell it in pieces...

The road to the second wonder of the world leads to Mesopotamia, where, according to the Bible, lay an earthly paradise. The capital of the land between the Euphrates and Tigris rivers was Babylon. Only its ruins remain today, but its splendour was a sight for sore eyes to behold for ancient visitors. They saw the mighty fortifications dominated by Ishtar's Gate, or the giant tower to which the biblical tale of the confusion of tongues is linked. But these magnificent monuments were nothing compared to the hanging gardens. The breathtaking structure consisted of stepped terraces that were built on top of each other in the manner of a pyramid. The individual terraces were covered with exotic plants and water flowed down them. The air was heavy with the scent of aromatic flowers. Cypress trees and palm trees provided soothing shade in a land scorched by a relentless sun. No wonder legends of a paradise in the middle of the desert spread around the world. According to one legend, the gardens were created during the reign of the mythical Semiramis, the queen who made Babylon the largest and most lavish metropolis of antiquity. According to other sources, King Nebuchadnezzar II had them built for his wife Amytis, who missed the green hills of her homeland in a city in the middle of the desert.

The reverse side of each coin, which is the work of the medal maker Petra Brodská, DiS., presents a supposed image of hanging gardens with a number of terraces, columns, trees and waterfalls. The English inscription states THE HANGING GARDENS OF BABYLON. The obverse side, which is common to the whole cycle, then presents all seven wonders of the world - the Egyptian pyramids, the Hanging Gardens of Semiramis, the Temple of Artemis at Ephesus, the statue of Zeus at Olympia, the Mausoleum at Halicarnassus, the Colossus of Rhodes and the Lighthouse on the island of Faro. As the coins of the Czech Mint are issued with the foreign licence of the island of Niue, they also bear the portrait and name of Queen Elizabeth II, the nominal value of 5 DOLLARS (NZD) and the year of issue 2021 on the obverse side.

Ten identical coins are sealed in special packaging. This is perforated so that it can be conveniently divided into ten parts if required.

Note: The packaging is covered with foil to prevent damage during transport. 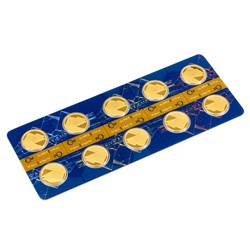