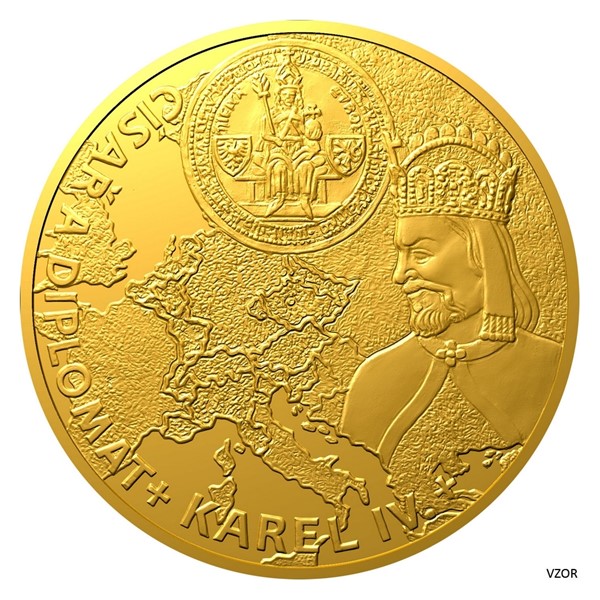 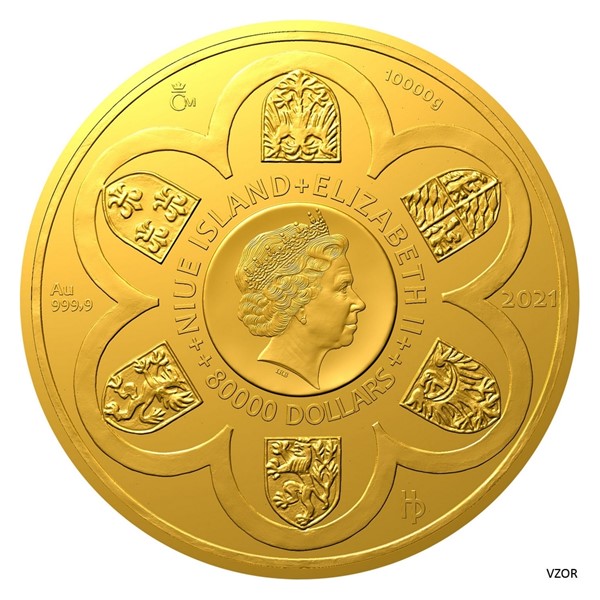 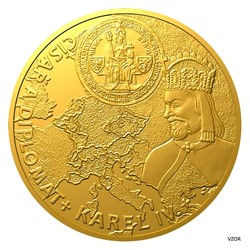 The relief of the largest gold coin of the Czech Mint features Charles IV, who is often praised as the greatest Czech of all time. The majestic mintage weighing ten kilograms represents him as an emperor and diplomat.

Few have left such a mark on our history as Charles IV. Famous as a fearless warrior, he was also an enlightened thinker who knew five languages and wrote an autobiography that served as a lesson for his successors. He loved women, wine and chivalric tournaments, but was well aware of the importance of education. He excelled in the delicate art of diplomacy and was a master at forging dynastic marriages. He found support in the Church and was instrumental in the elevation of the Bishopric of Prague to an archbishopric. He was the first of the Bohemian kings to be crowned Holy Roman Emperor, but although he became one of the most powerful men in the world, he did not forget the Bohemian lands. He honoured the legacy of his Přemyslid ancestors and turned impoverished Prague into the heart of the Holy Roman Empire. From the disunited Bohemian kingdom he created a whole called the lands of the Bohemian Crown, whose vast territory, which included Bohemia, Moravia, the Silesian principalities, Cheb, Upper Palatinate, Upper and Lower Lusatia, Brandenburg and other fiefs in the German area, fell under the direct rule of the Bohemian monarch. He had made the breathtaking St. Wenceslas crown for the future Czech kings and secured them a privileged position in the multi-national empire, which was secured by the Golden Bull of Charles IV. This most important constitutional document of the medieval Holy Roman Empire was so elaborate that it remained in force until its dissolution in 1806.

The reverse side of the coin, which is the work of the leading medal maker Mgr. Petr Horák, presents a crowned bust of Charles IV looking at a map of his European empire centred in Prague. The second figure of the Emperor - this time seated on a throne and holding the badges of power - can be found in the reconstruction of the Golden Bull of Charles IV. The composition of the obverse side of the coin consists of the coats of arms of the countries of the Fatherland and the attributes of the island of Niue, which provides the Czech Mint with a licence to issue its own coins. These essential elements include the name and portrait of Queen Elizabeth II, a nominal value of 80 000 DOLLARS (NZD) and the year of issue 2021.

The schedule of issuance includes only 5 pieces of ten-kilogram gold coins. The deluxe packaging includes a numbered certificate of authenticity from the State Printing Office. 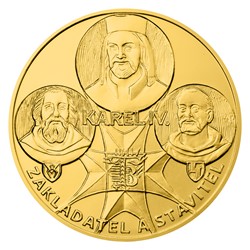 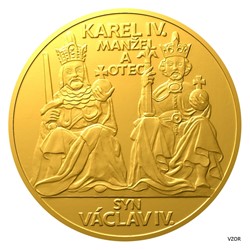 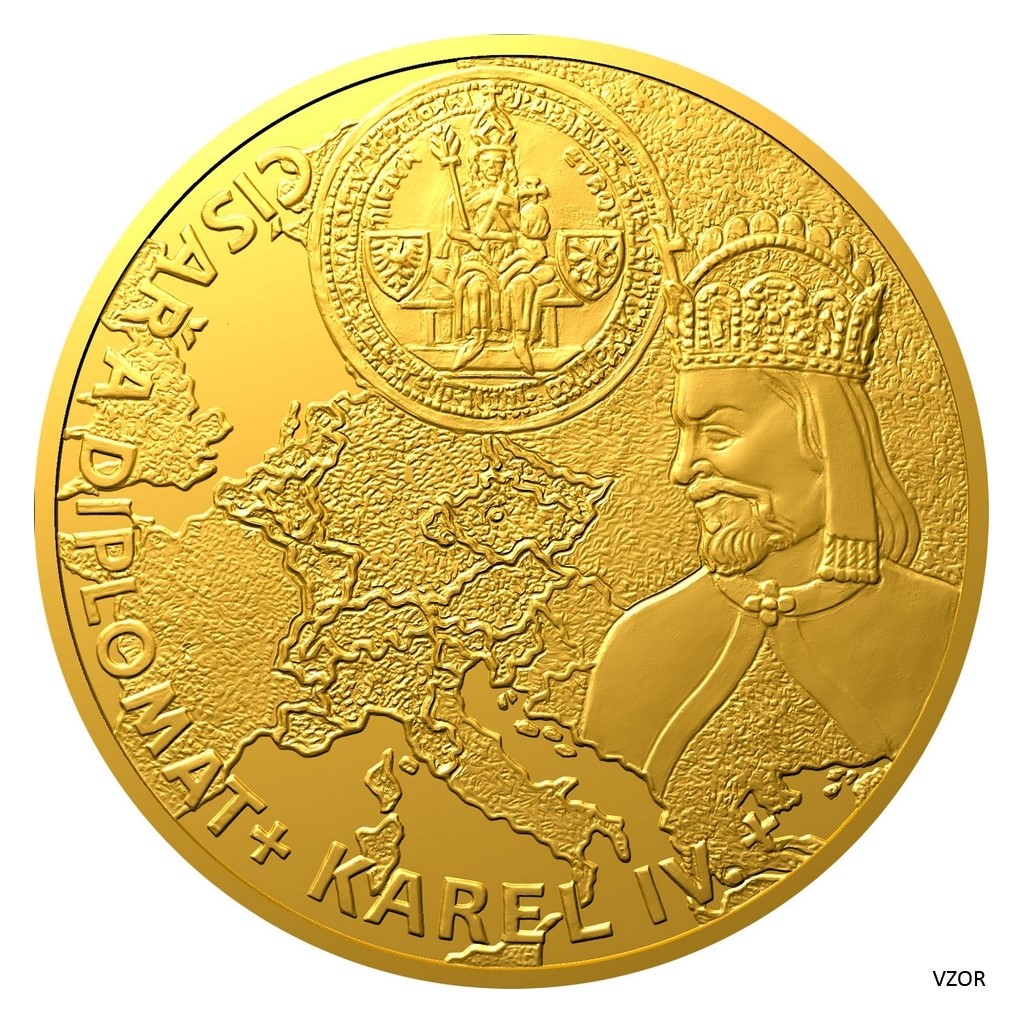 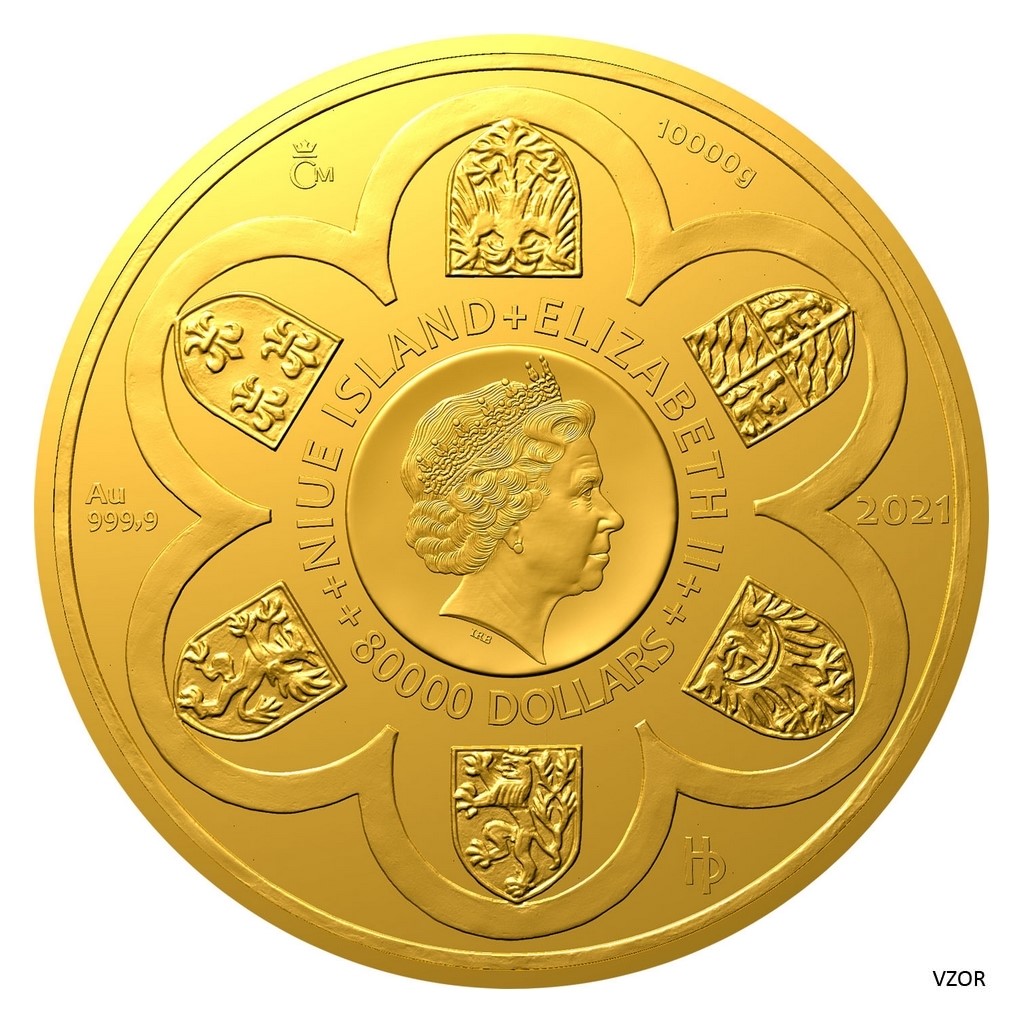