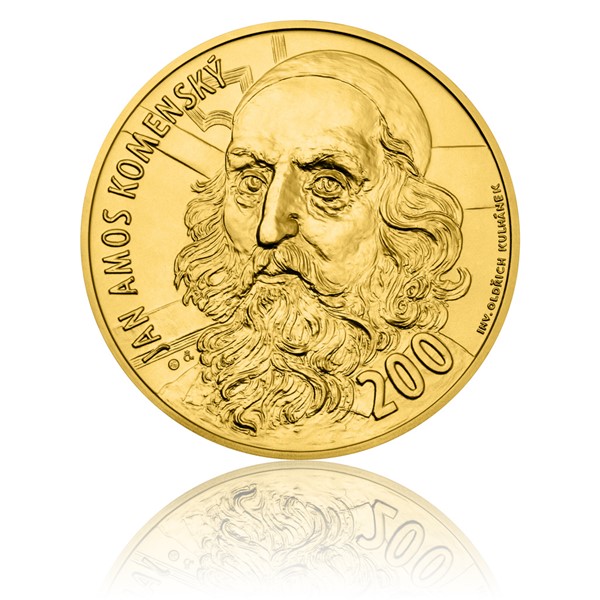 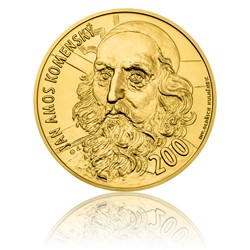 Stock state
Sold out
Date of issue
March 2014
Mintage
100 pcs
Sold out
The approximate purchase price of the product is On request. The purchase takes place according to the purchase rules.
Purchase rules

Introducing a strictly limited edition of just 100 investment medals with the weight of the traditional 40-ducat (139.5 grams) inspired by the CZK200 banknote. Each medal is hand-numbered on the edge.

Czech banknotes are rightly rated among the most beautiful in the world. The author of their designs, academic painter Oldřich Kulhánek, sadly passed away last year, but his work is immortal and the banknote designs belong to his masterpieces. A commemorative medal Jan Amos Comenius is issued in a series of gold and silver commemorative and investment medals inspired by this giant of Czech and world history.

Oldřich Kulhánek’s daughter MgA. Klára Melichová was in charge of the composition of graphic designs.

The gold commemorative medal was created with a significant artistic contribution of the academic sculptor Vladimír Oppl who prepared a plaster model for the mintage process based on the graphic design. Vladimír Oppl also authored, for example, the graphic design of the 1999 most beautiful world coin – the gold commemorative coin Prague New Town of the Charles IV set.

Jan Amos Comenius is known not just as a progressive educator and writer. Czechs deem Comenius a patriot who dearly loved his nation and was deeply affected by the suffering in the aftermath of the Battle of White Mountain. Comenius’ ideas infused Czechs with strength at a time of despair. As the last bishop of Bohemian Brethren, Jan Amos Comenius was very pious, but at the same time he was tolerant in his faith and sought understanding between the churches. His respect for humanity, knowledge and love of truth far exceeded his time and they carry on an urgent message to all generations. His work is considered to be a comprehensive methodology of humanity.

According to his own biography, Comenius was born in 1592 in Nivnice. He spent part his childhood in Uherský Brod and after he became an orphan he lived with his aunt in Strážnice. He studied theology in Herborn and Heidelberg. In 1616 he was ordained a priest, and shortly thereafter he began to lead the Bohemian Brethren church in Fulnek where the news of the defeat of the Czech uprising caught up with him. After the White Mountain battle he had to hide as a protestant priest and mostly lived at the Brandýs estate of Charles the Elder of Žerotín (Zierotin). The national tragedy became entwined with his personal tragedy when his wife and two children died. In 1628 he left for Leszno, Poland, where he lived in exile as a teacher and rector of the Brethren grammar school, and from 1648 as a Brethren bishop. In 1656 Leszno was burnt down and Comenius moved to Amsterdam, where he lived and worked until his death in 1670.

The 40-ducat variant of the gold medal is a scaled down version of the one-kilogram variant. The lesser weight makes investment in gold more accessible and liquid. From the time immemorial, gold has always been used for safekeeping of assets. Its key property is long-term stability - while paper currency loses value, the value of gold remains high.

An example of appreciation of your investment in artistically processed precious metals:

The value of a gold medal issued to commemorate Vaclav Havel gained 20% in less than two years despite a drop in gold prices on the stock exchange (at the issue date the price of gold was around USD 1,700/oz.). The gold medal with the serial number 77 marking the 75th birthday of singer Karel Gott fetched CZK 80,000 at an auction immediately after the entire edition was sold out (the issue price was CZK 55,000). 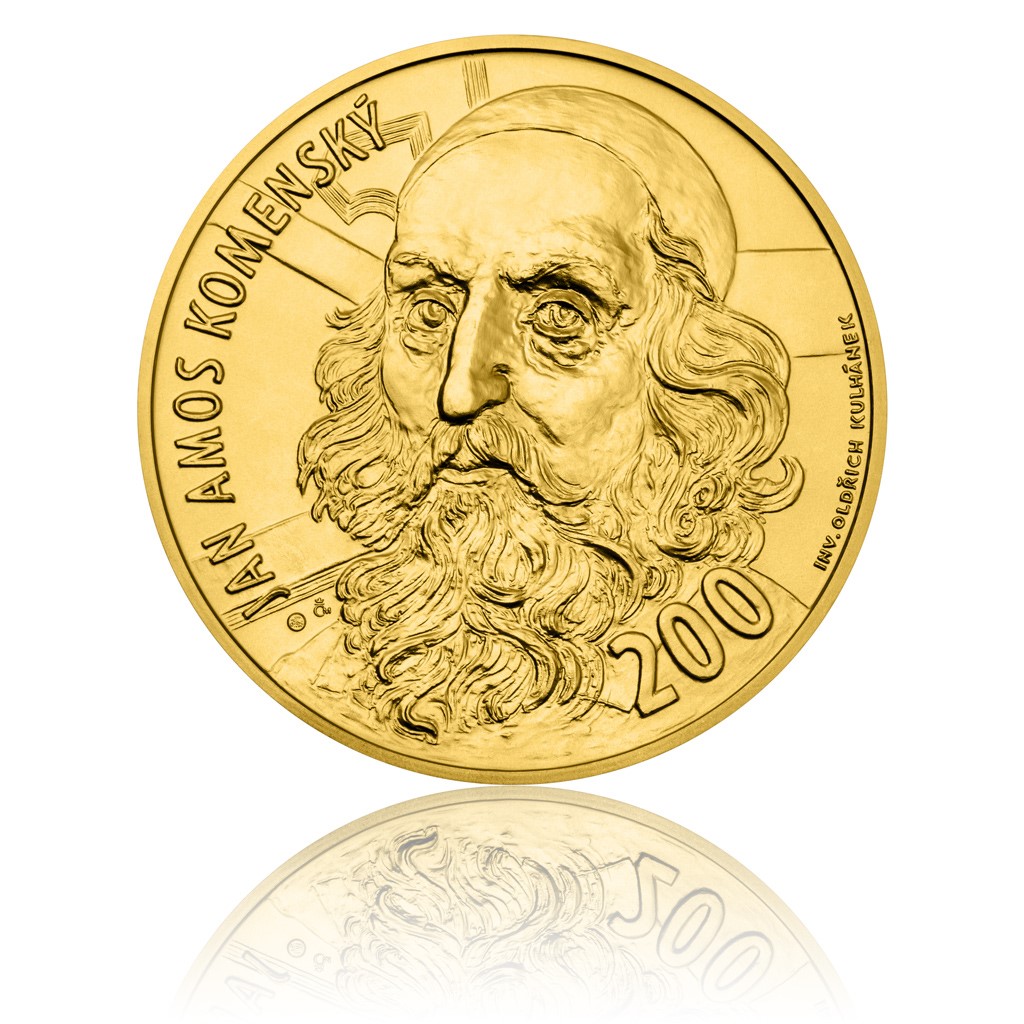 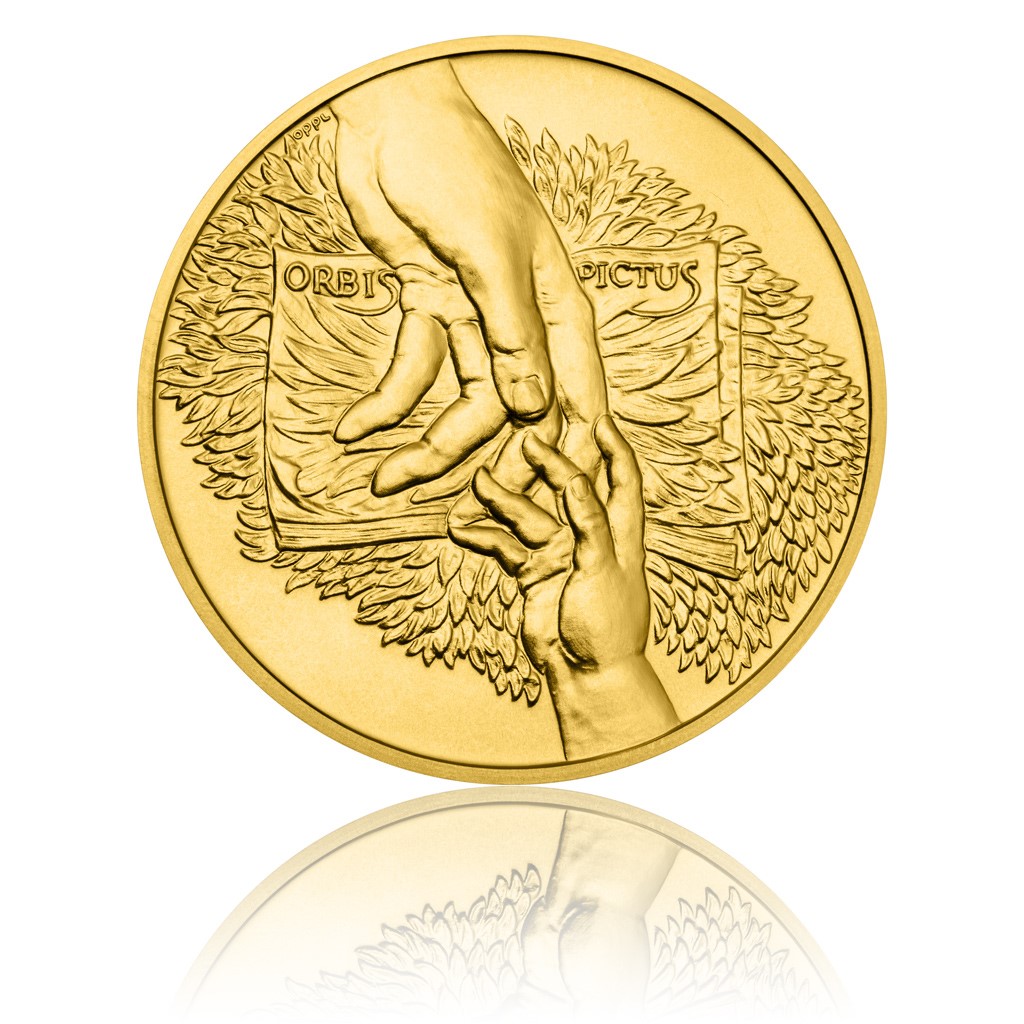