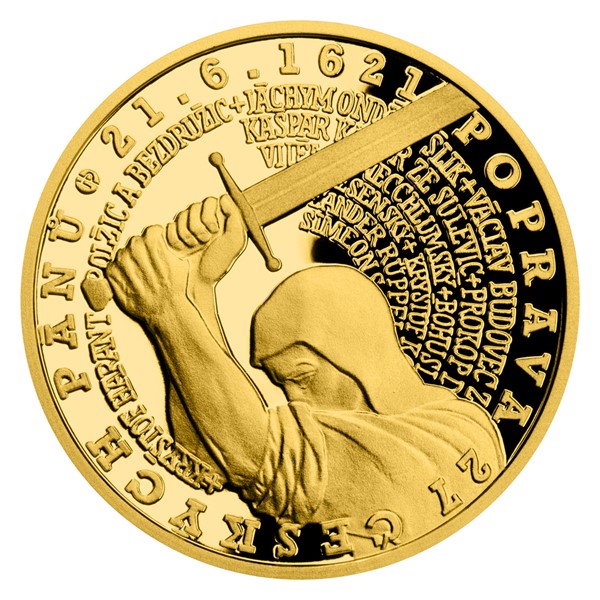 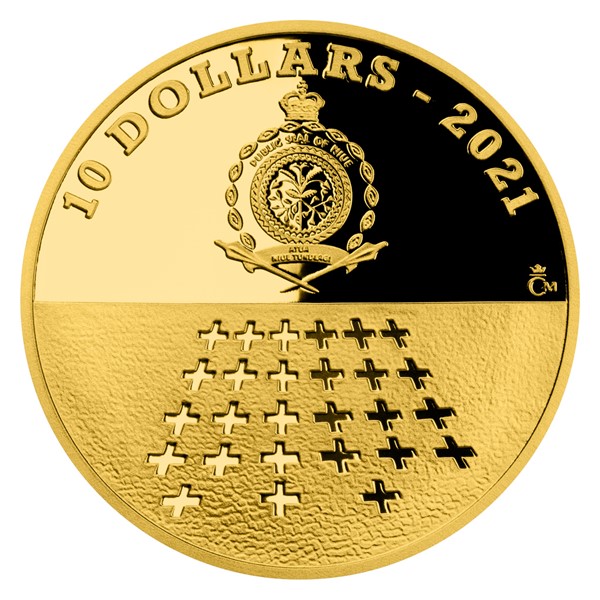 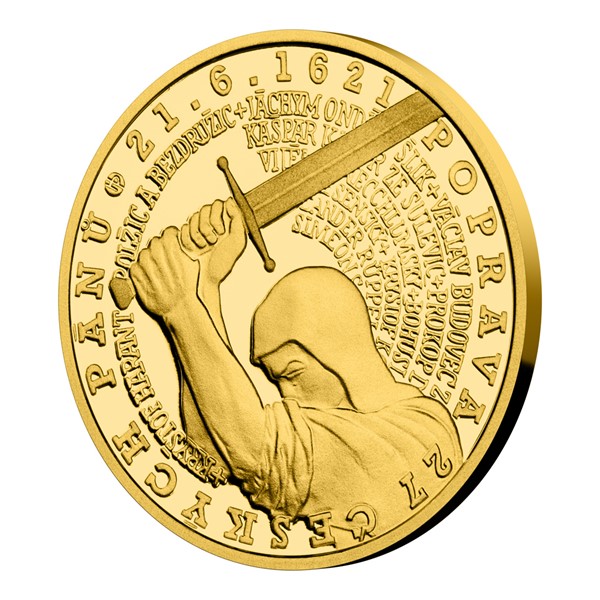 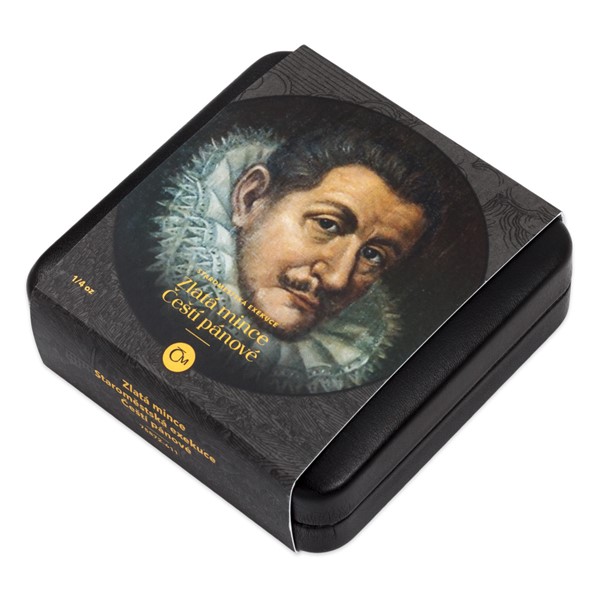 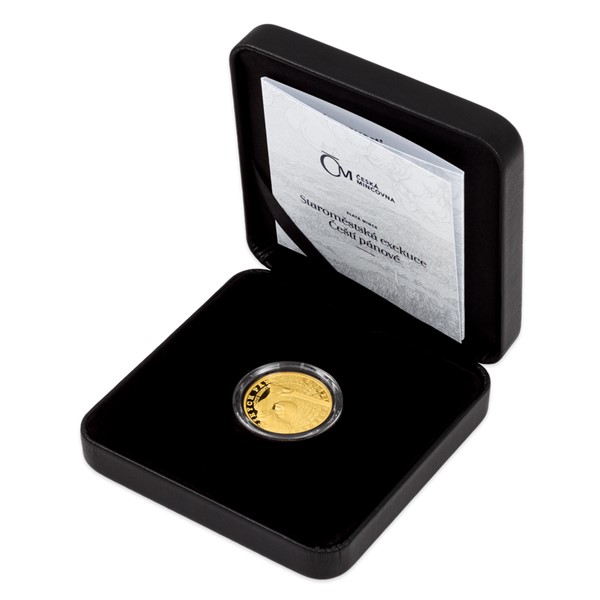 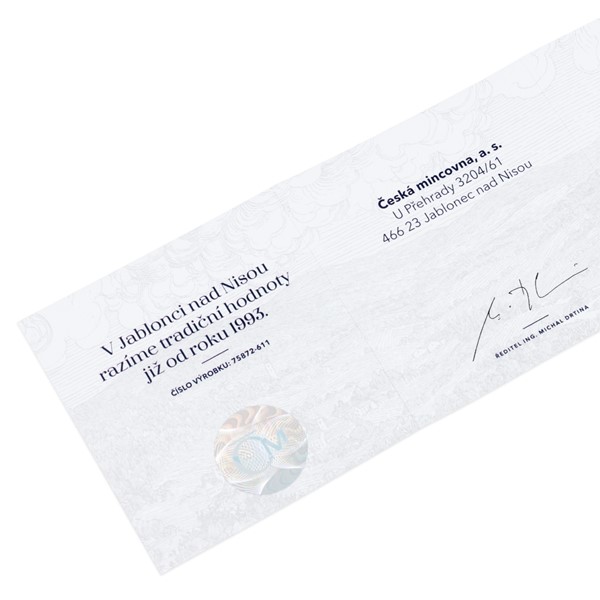 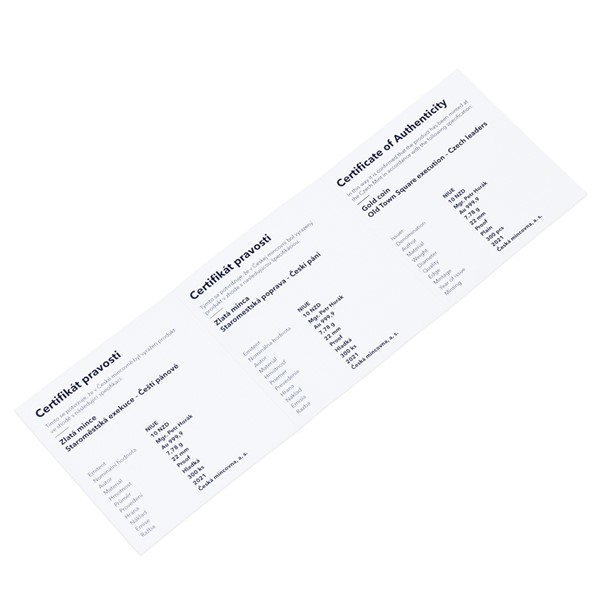 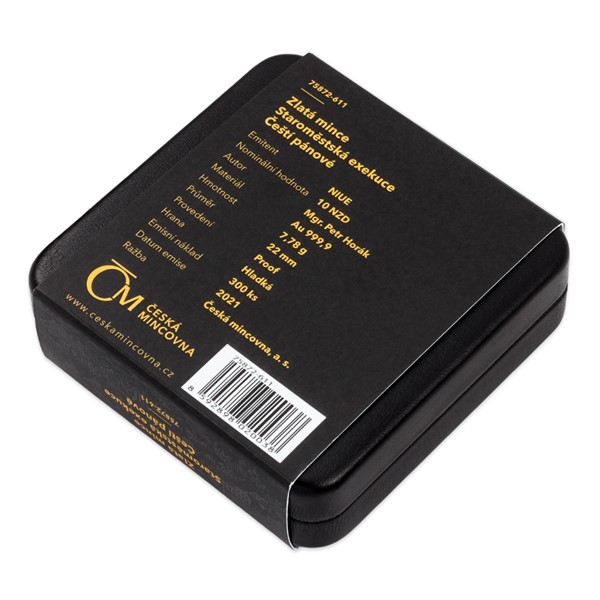 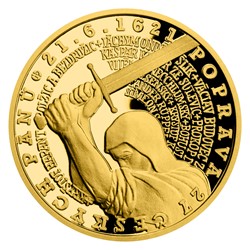 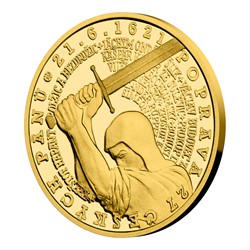 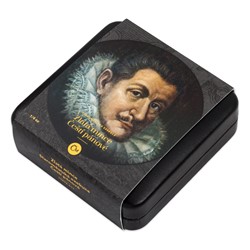 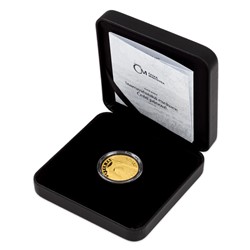 The third gold coin of the Czech Mint from the miniseries entitled Old Town Execution is dedicated to Czech loards who breathed their last 400 years ago.

While King Friedrich of Palatinate fled to Holland after losing the Battle of White Mountain, most of the leaders of the defeated estate uprising remained in the Czech lands in the hope that the emperor's retribution for their betrayal would be modest. Unfortunately, they were wrong and their absolute punishment went down in history as an Old Town execution. This cruel spectacle is also known as the execution of 27 Czech lords, but there were only a few convicted men among the convicts. The executioner sent 3 convicted lords, 7 knights, and 17 burghers to the other world on June 21, 1621. They were Jáchym Ondřej Šlik, Václav Budovec from Budov, Kryštof Harant of Polžice and Bezdružice, Kašpar Kaplíř from Sulevice, Prokop Dvořecký from Olbramovice, Fridrich from Bílá, Jindřich Otta from Los, Diviš Černín from Chudenice, Vilém Konecchlumský from Konecchlumí, Bohuslav from Michalovice , Valentin Kochan from Prachová, Tobiáš Štefek from Koloděj, Ján Jesenský, Kryštof Kober from Koberšperk, Jan Šultys from Felsdorf, Maxmilián Hošťálek from Javořice, Jan Kutnauer from Sonnenštejn, Simeon Sušický from Sonnenštejn, Nathanael Vodňanský from Uračov, Václav Maštice Kozel from Peclinovec, Ondřej Kocour from Votín, Jiří Řečický, Michal Witmann, Simeon Vokáč from Chyš, Leander Rüppel from Ruppach and Jiří Hauenšild from Fürstenfeld. The order of executions was determined by professional dignity. Most of the convicts were beheaded, three were hanged. The cruelest fate befell the famous doctor Ján Jesenský, whose tongue was cut out before execution. Supporters of the executed and their opponents agreed that all the gentleman facing death behaved with dignity. Most of them were mature men. Spiritual comfort was given to them by the priests, who then interpreted the last words to the watching crowd. During the execution, however, they played the trumpets and drums so loud that the people would not hear them. Even after their death, the executed ones were restless. Their remains were disfigured - quartered, woven into a wheel, bumped into stakes and exposed to the public as a warning…

Mgr. Petr Horák depicted on the reverse side of the coin a detail of Jan Mydlář's executioner ready to wave his sword. The rich inscription contains in several lines the names of some convicts who increase the impression of a whistling sword, as well as the text POPRAVA 27 ČESKÝCH PÁNŮ – 21. 6. 1621 (EXECUTION of 27 CZECH LORDS - June 21, 1621). Since the coins of the Czech Mint are licensed by a foreign issuer, the island of Niue, the obverse side bears its national emblem, a value of 10 DOLLARS (NZD) and the year of issue 2021. All this is supplemented with the Old Town sidewalk with twenty-seven crosses.

Do not forget that you can store four coins in a wooden collector's box, which you will also find in the offer of the Czech Mint. 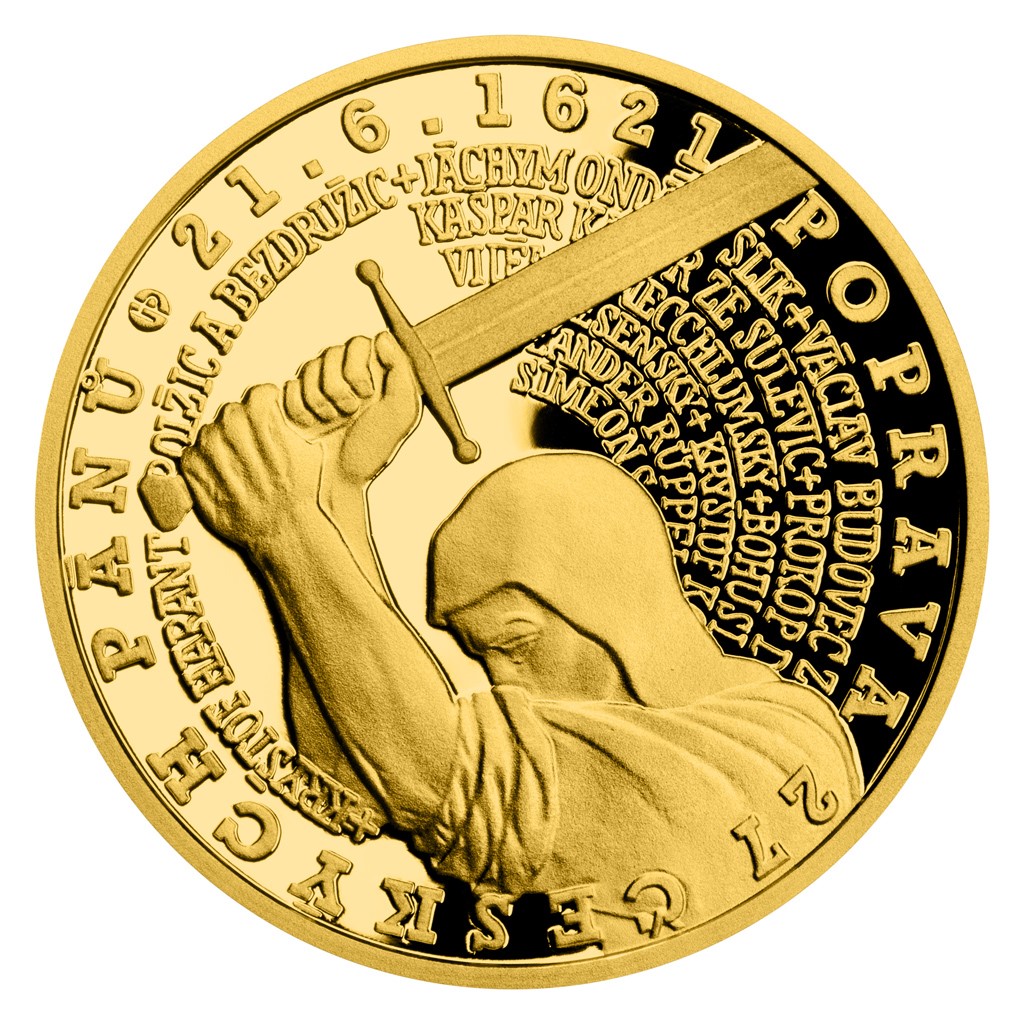 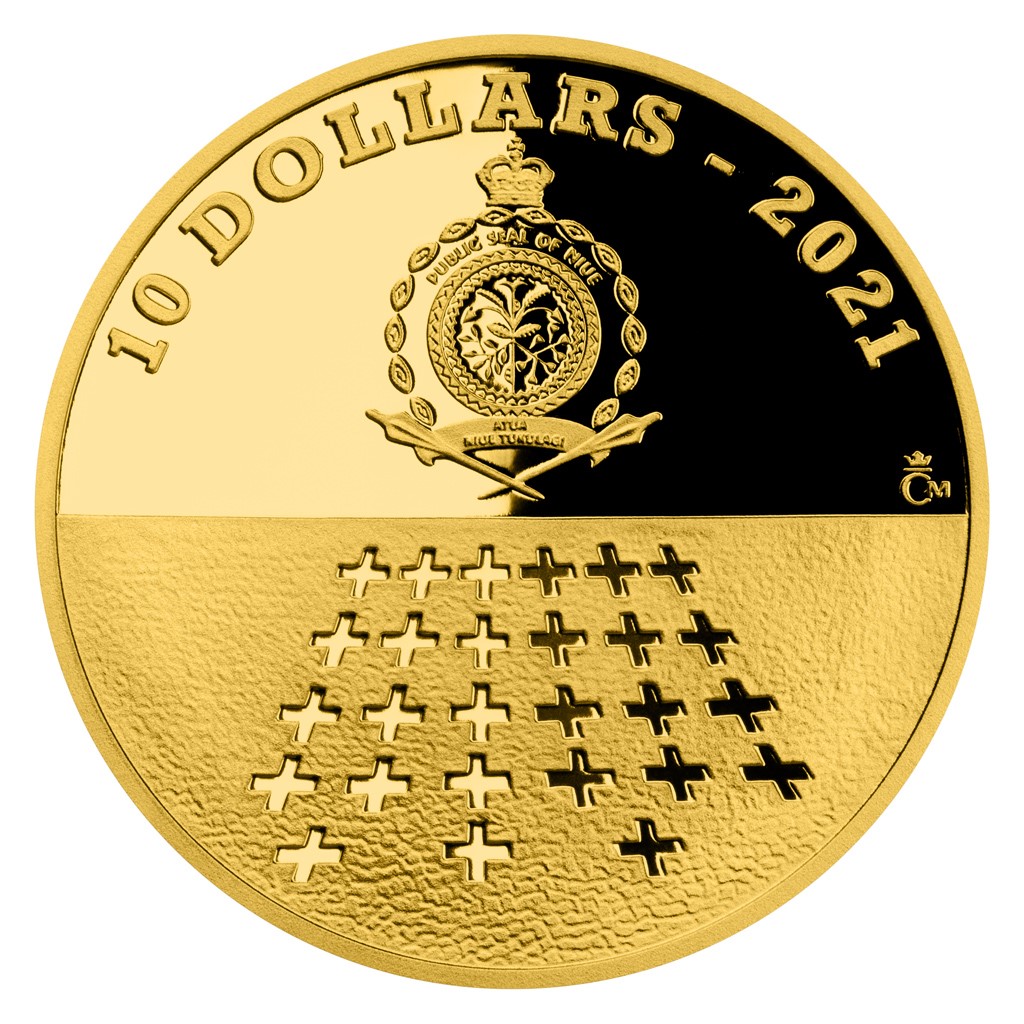 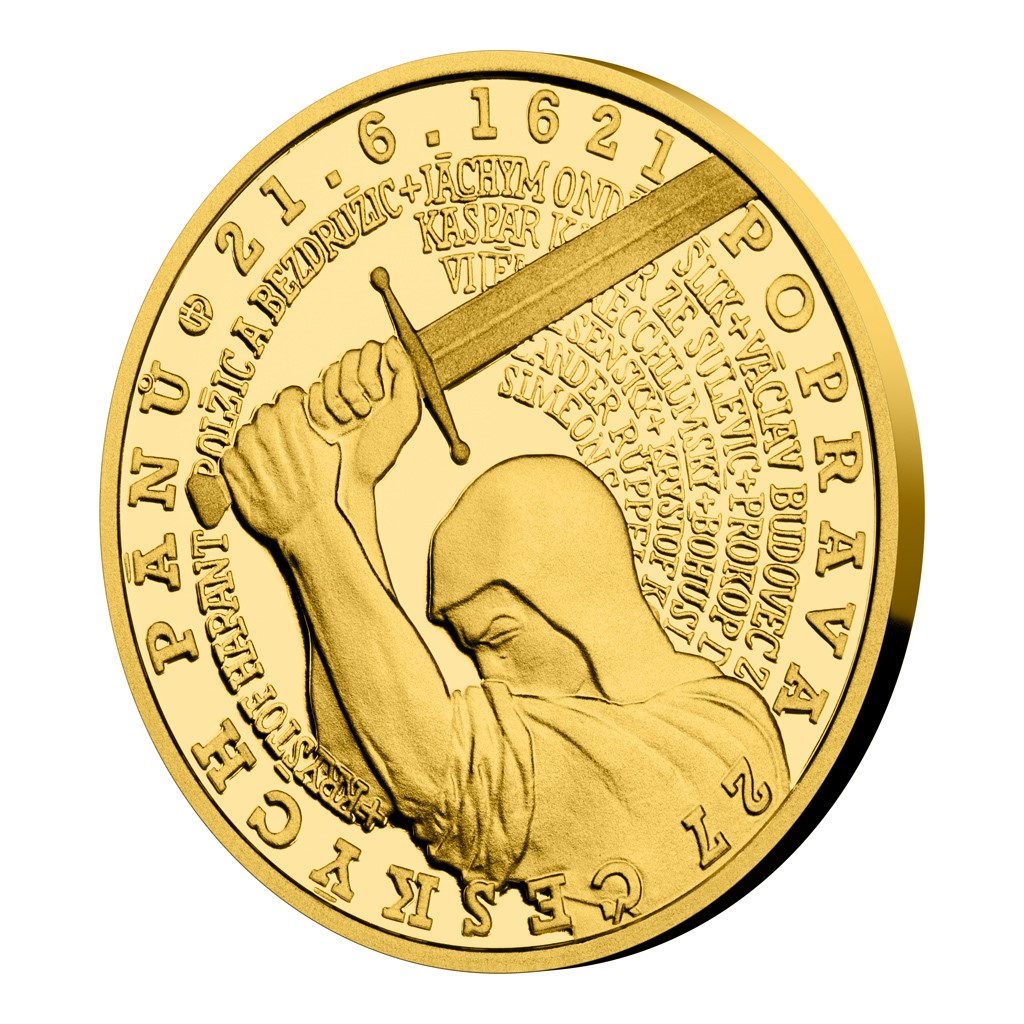 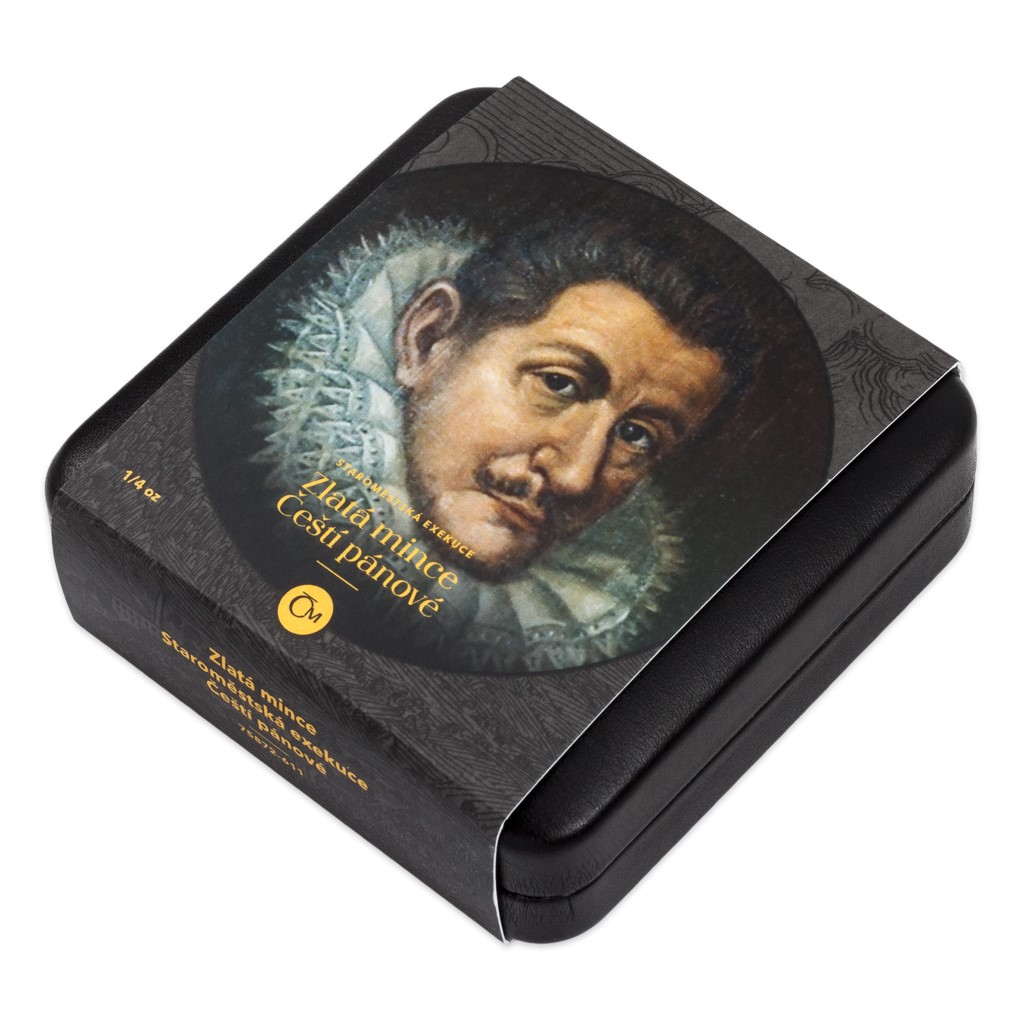 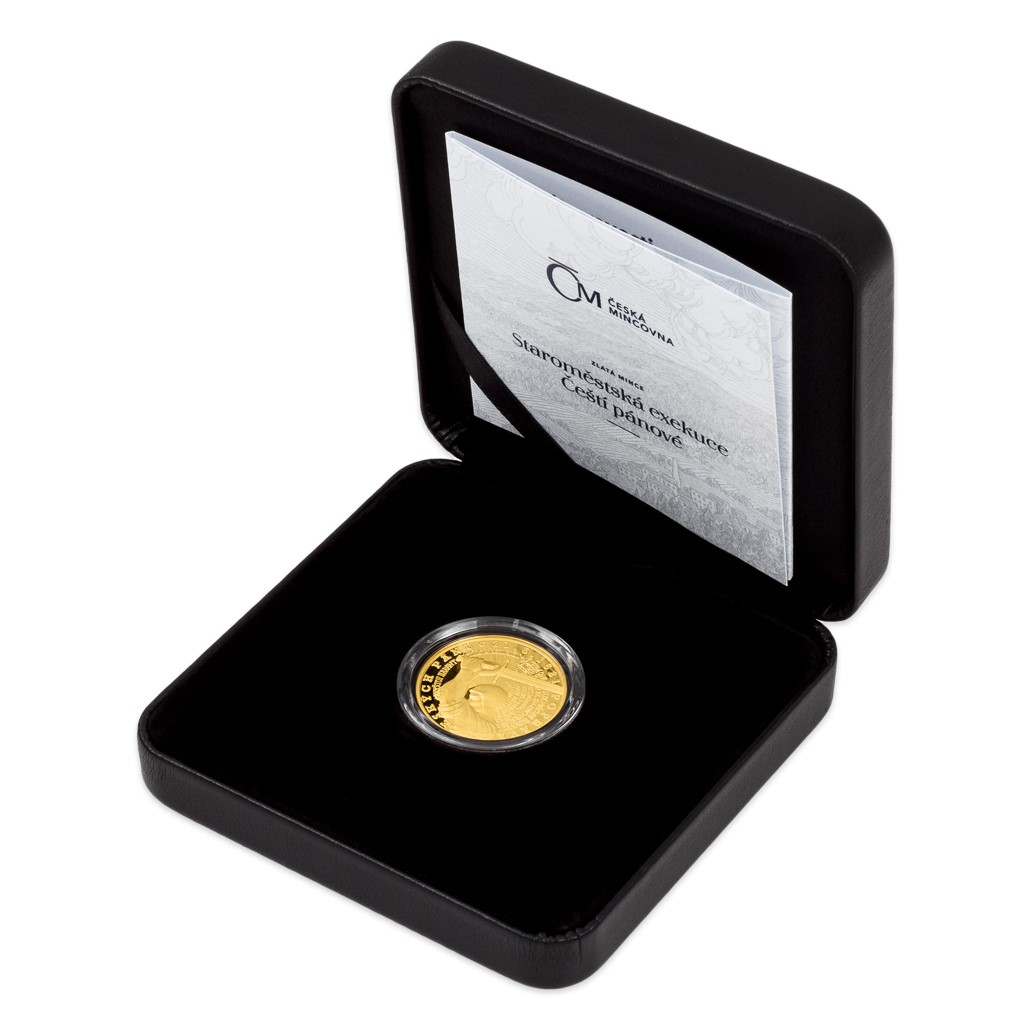 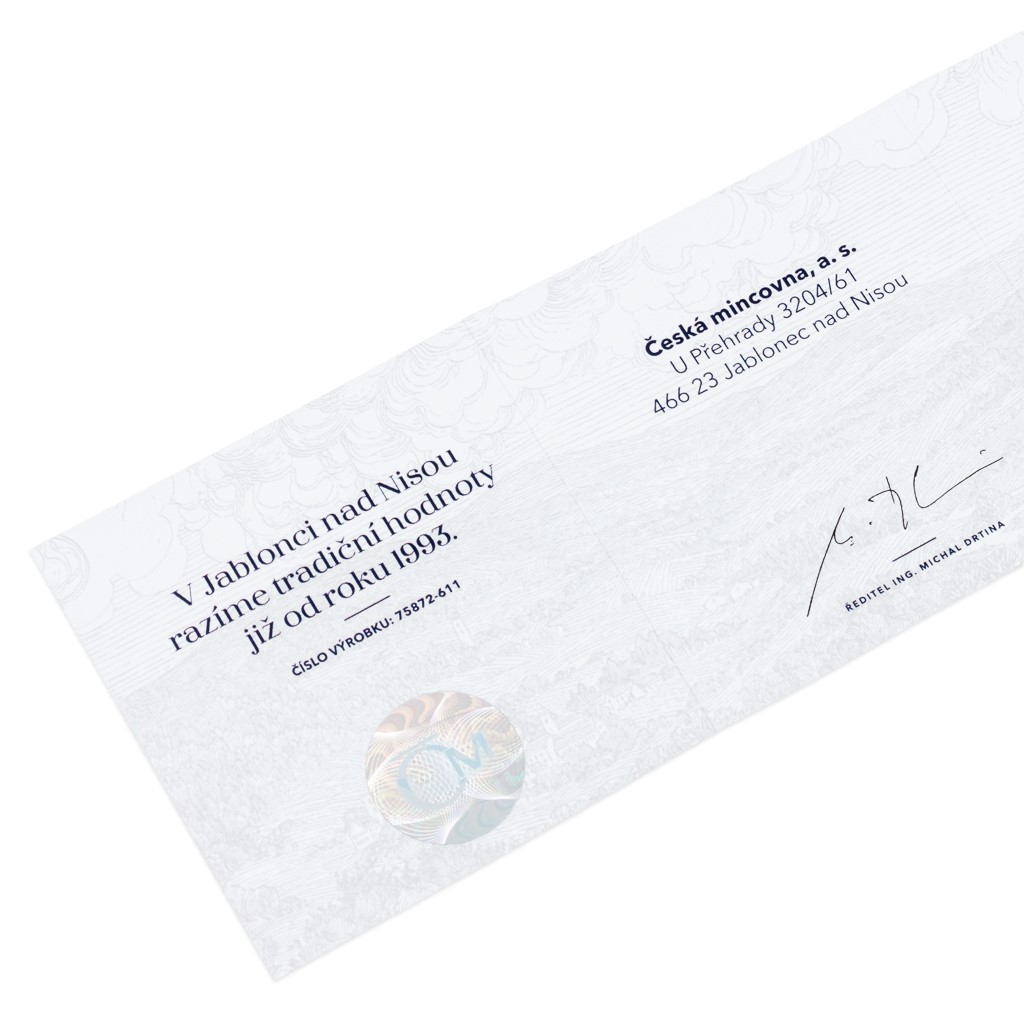 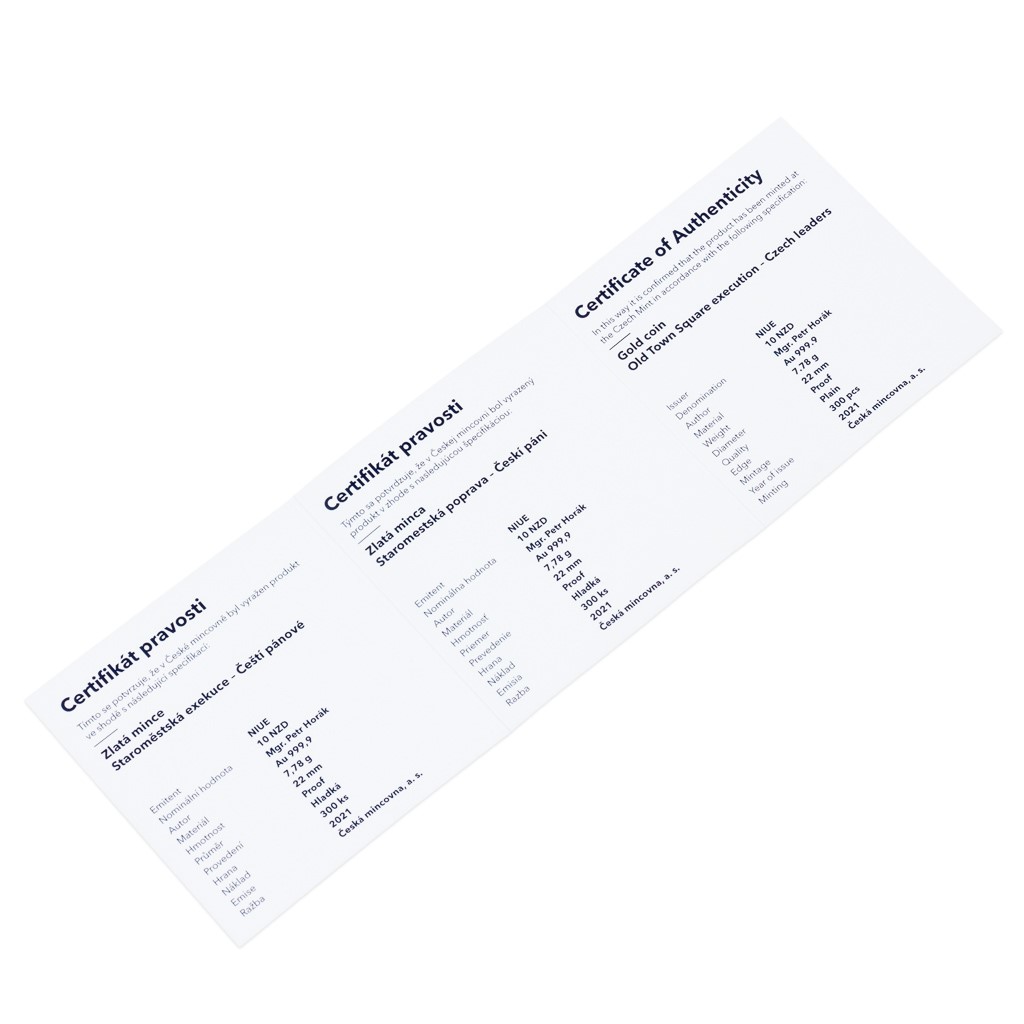 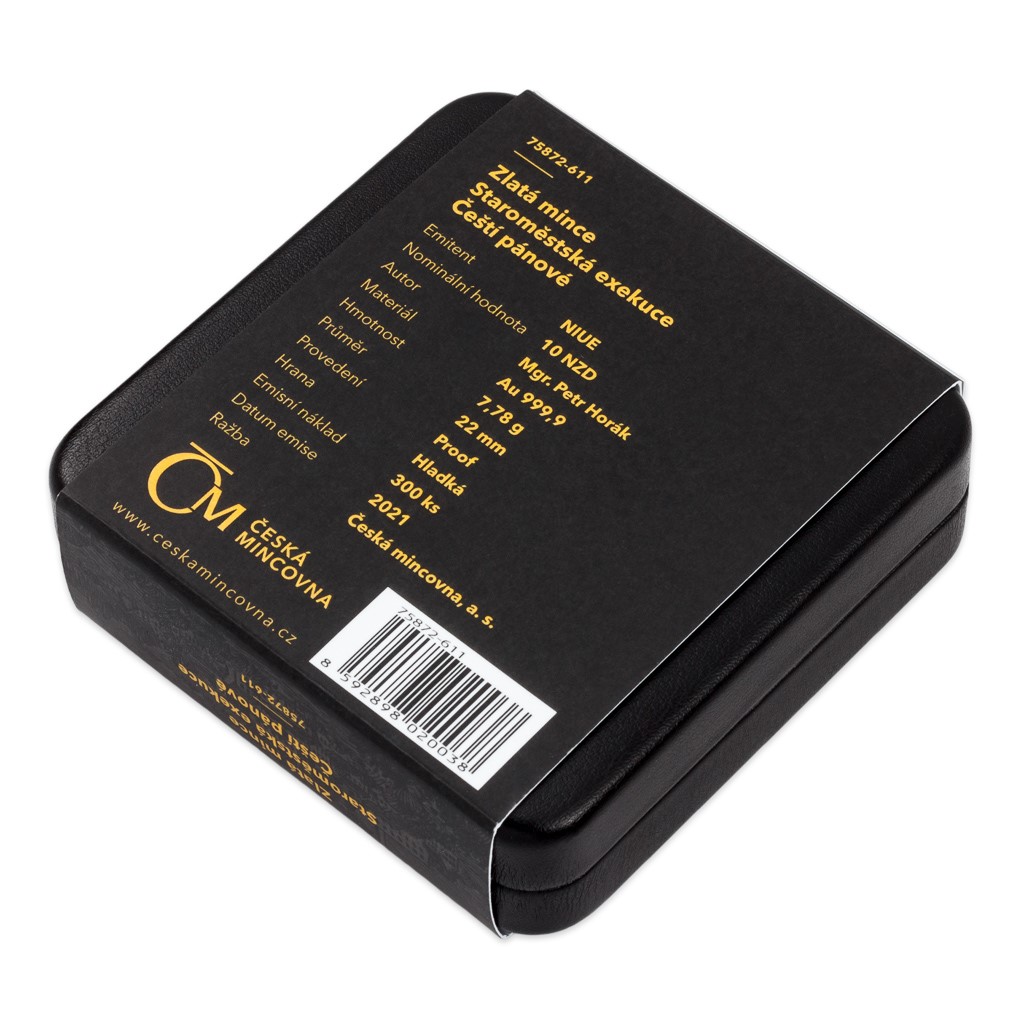 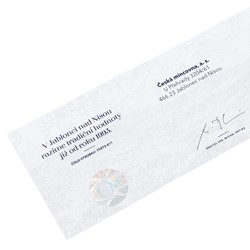 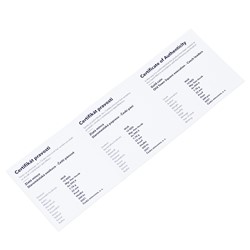