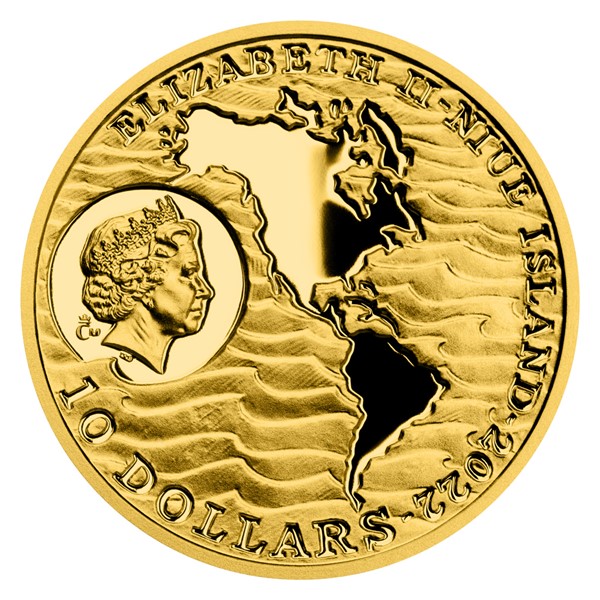 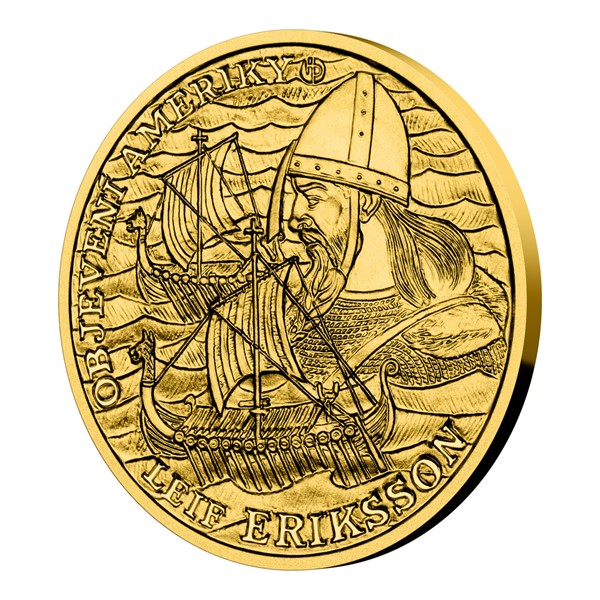 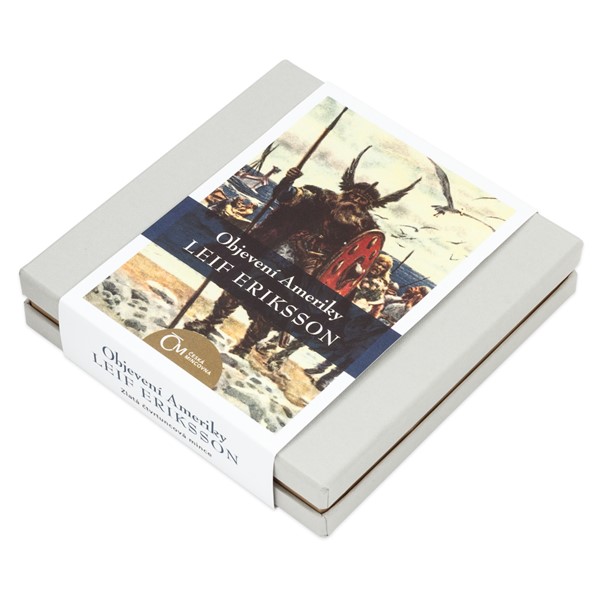 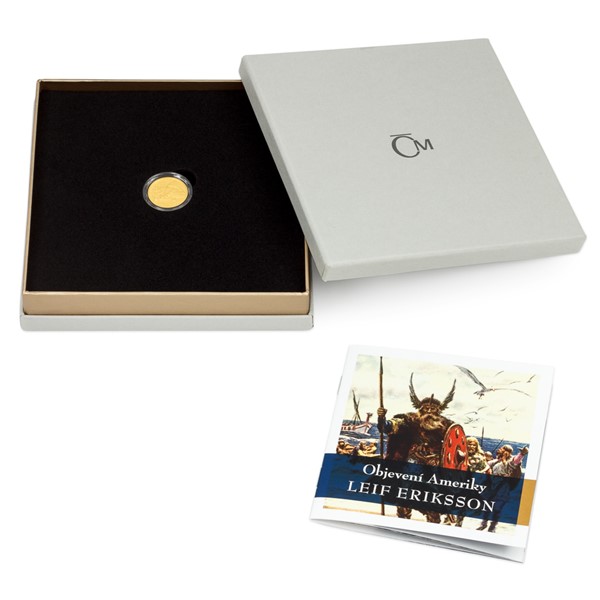 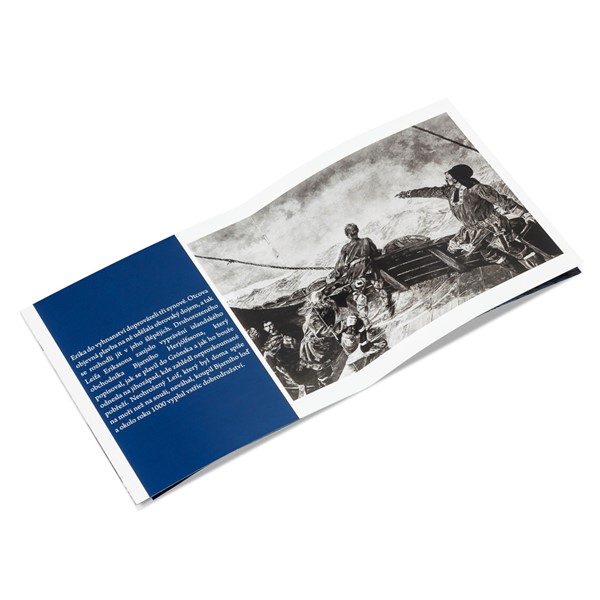 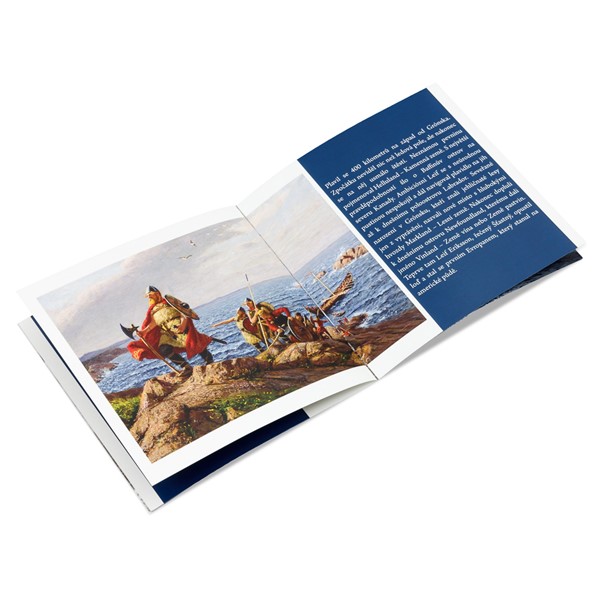 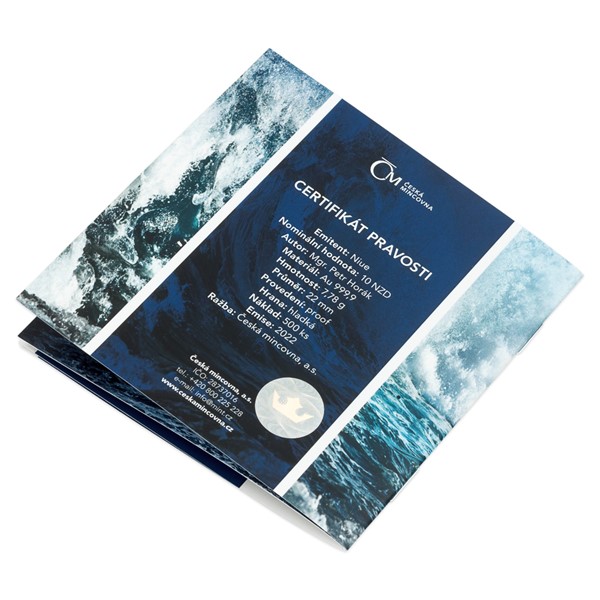 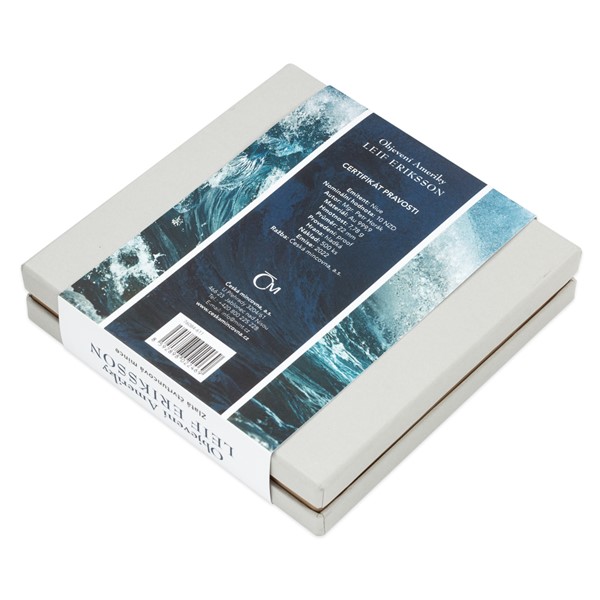 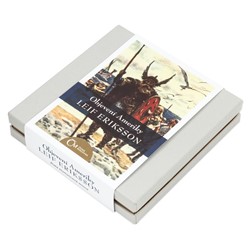 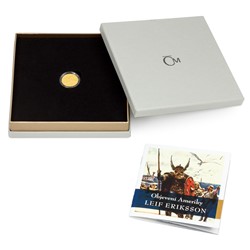 The first gold coin of the Czech Mint from the miniseries entitled Discovery of America commemorates the adventures of the Viking sailor Leif Eriksson.

The legendary Vikings were not only fierce raiders who ruthlessly plundered Europe, but also experienced sailors who mastered the wild element enough to set out for a journey into the unexplored west. They settled the smaller archipelagos - the Hebrides, Orkney and Shetland in the 8th century, they conquered Iceland in the 9th century, and they ventured further afield in the 10th century. The Northerners then confirmed their violent nature, as the era of their revolutionary discoveries was kick-started by murder. A man named Thorvald was banished from Norway for manslaughter and settled in Iceland, where he started a family. Like father like son - his son Erik Thorvaldsson, nicknamed Red, committed a double murder. He was able to redeem himself from this grave sin with a three-year exile, but where to go from the last outpost of the Viking world? Erik remembered the story of a sailor who, after a storm had driven him far from the shores of Iceland, saw the outlines of a strange land. As an outlaw, he had no choice but to venture into the unknown. After a 700-kilometre voyage westwards, he did indeed discover a new island - today's Greenland, where the climate was pleasantly mild at the time. Three sons accompanied Erik into exile. Impressed by their father's voyage of discovery, they decided to follow in his footsteps. The second-born, Leif Eriksson, was impressed by the merchant's story of how he had sailed to Greenland and how a storm had carried him to the south-west, where he saw an unexplored coastline. The fearless Leif, who was more at home at sea than on land, did not hesitate, bought a ship and set off on a 400-kilometre voyage to meet the adventure around the year 1000. At the end of it, he became the first European to reach America. The Vikings were surprised by the richness of the local countryside, with its abundance of game, land for cultivation and grazing for cattle. They established a settlement, made many more expeditions, and clashed with the Indians, but their incredible discovery of the New World has been almost forgotten…

The reverse side of the commemorative coin, which is the work of the medal maker Mgr. Petr Horák, presents a profile portrait of Leif Eriksson. The coin's surface is filled with waves on which two Viking drakkars are cradled. The waves surrounding North and South America can also be found on the obverse side, which is common to the entire series of discovery coins. As the licence to issue the Czech Mint commemorative coins is provided by the Pacific island of Niue, the obverse side still bears its necessary attributes - the name and portrait of Queen Elizabeth II, the nominal value of 10 DOLLARS (NZD) and the year of issue 2022.

The package includes a spectacular booklet that describes in words and pictures the Vikings' journey to America. 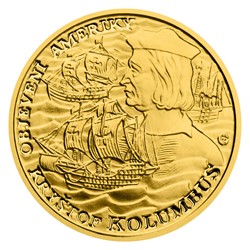 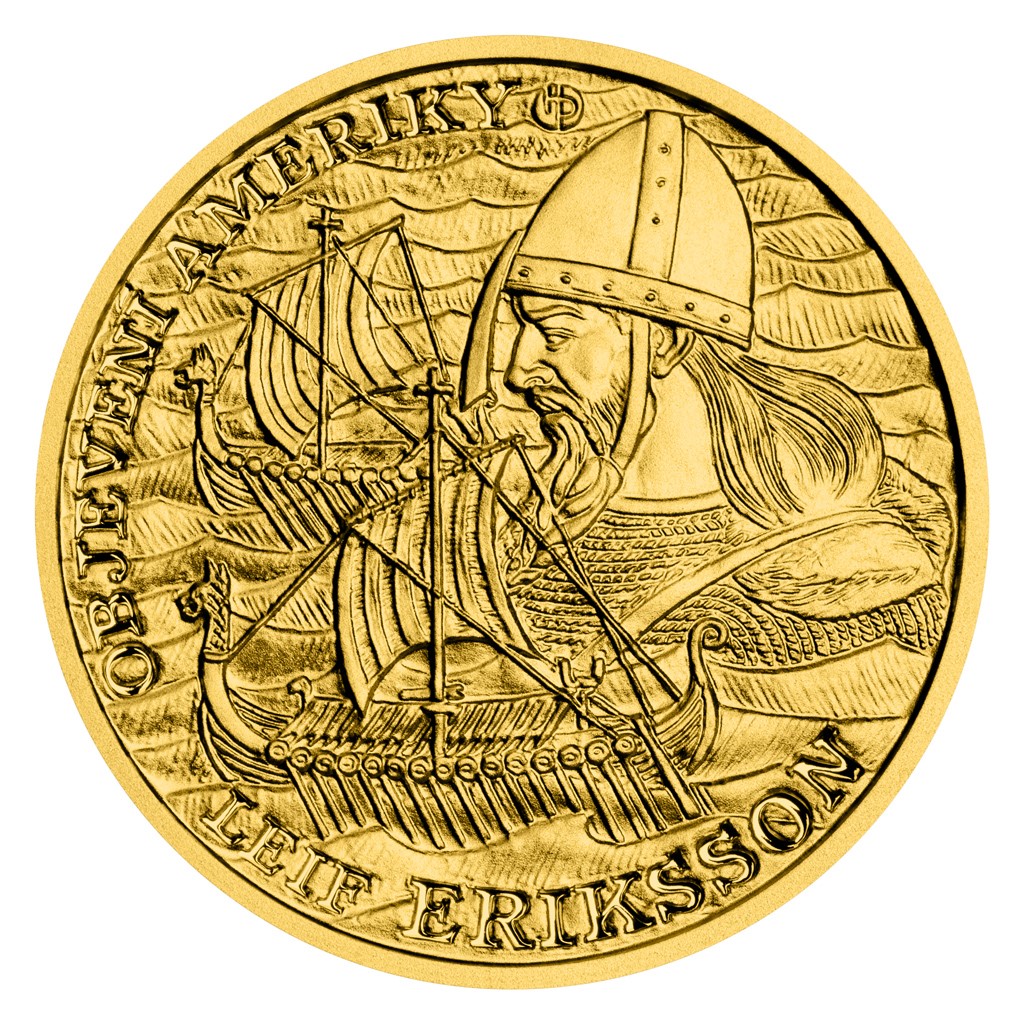 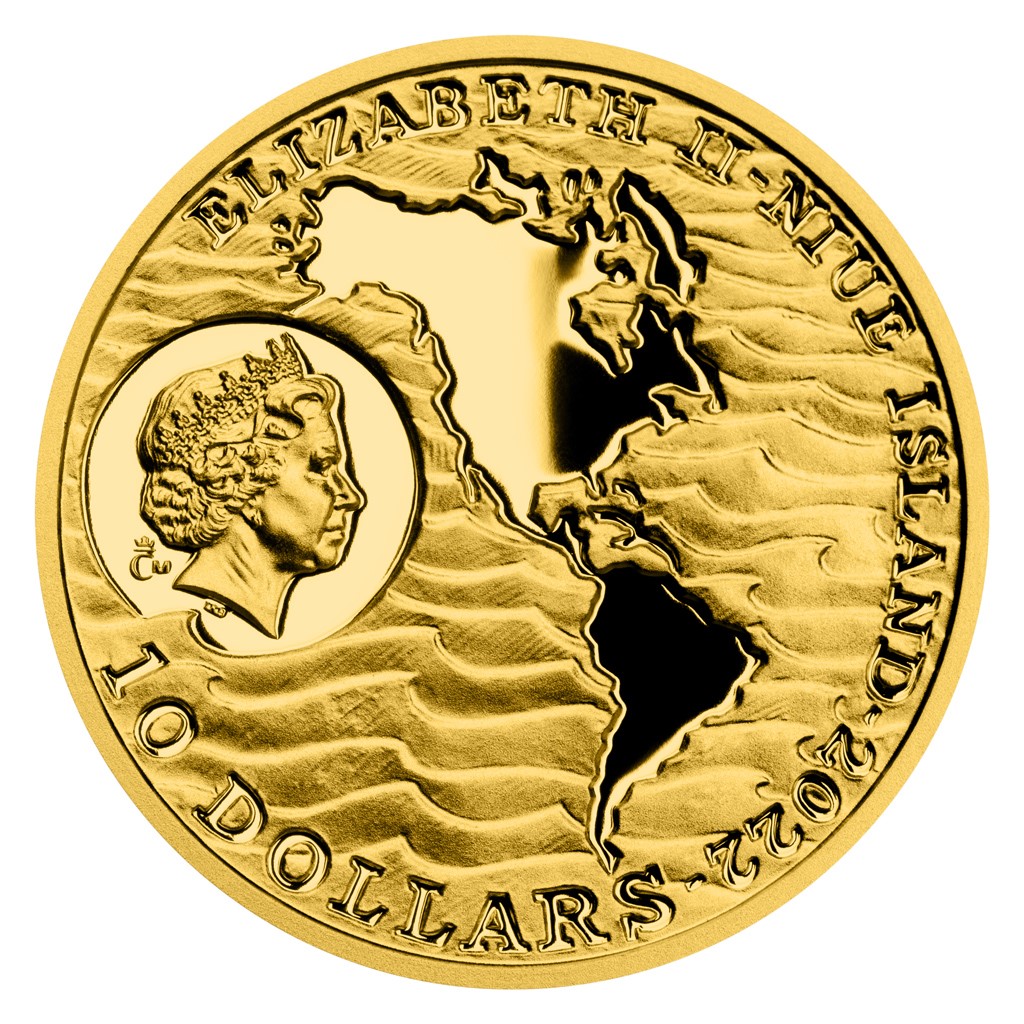 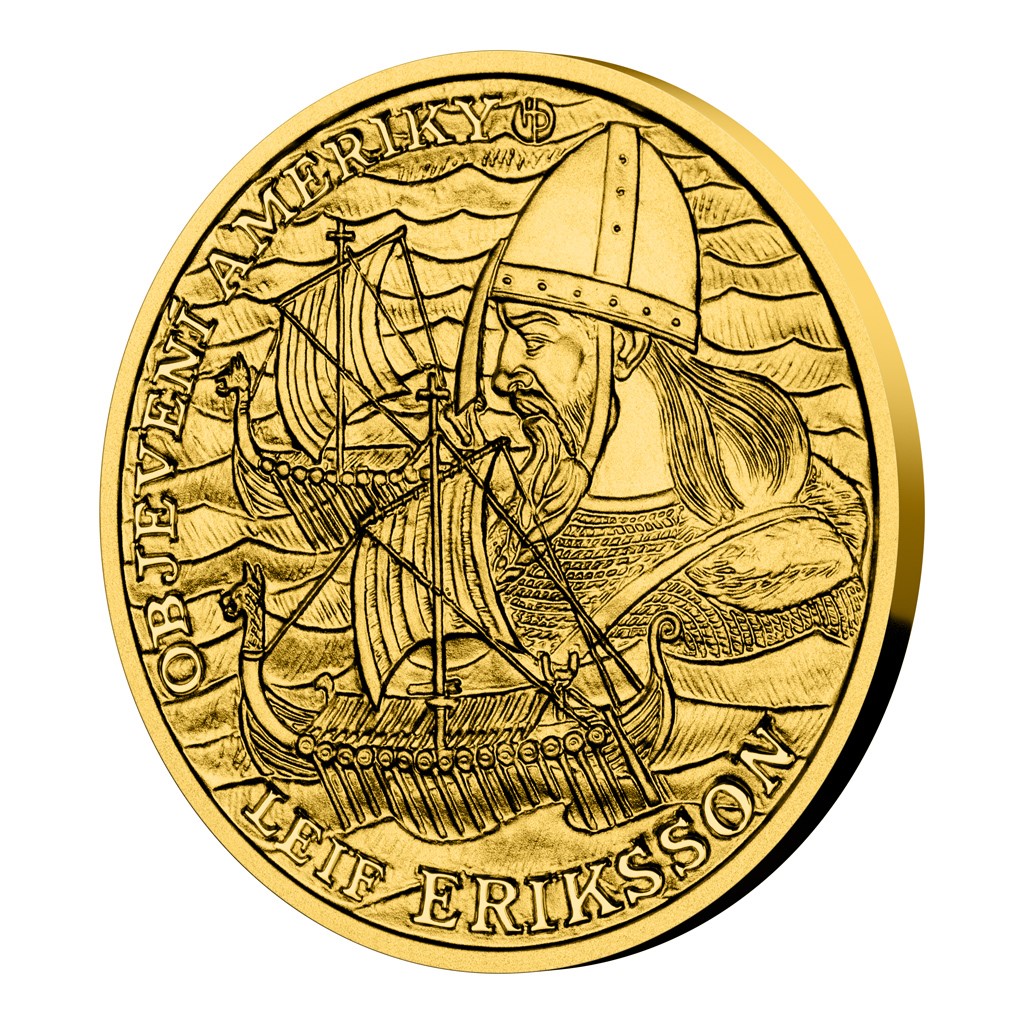 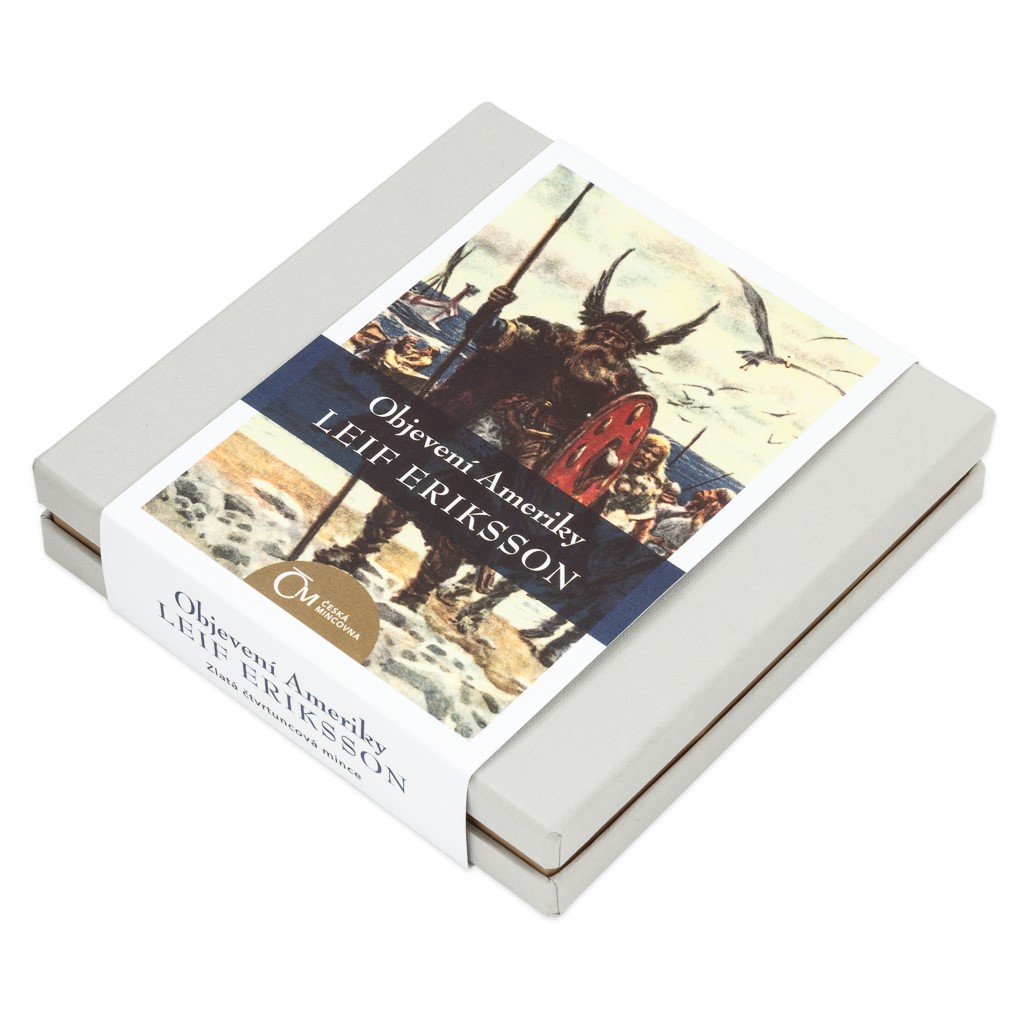 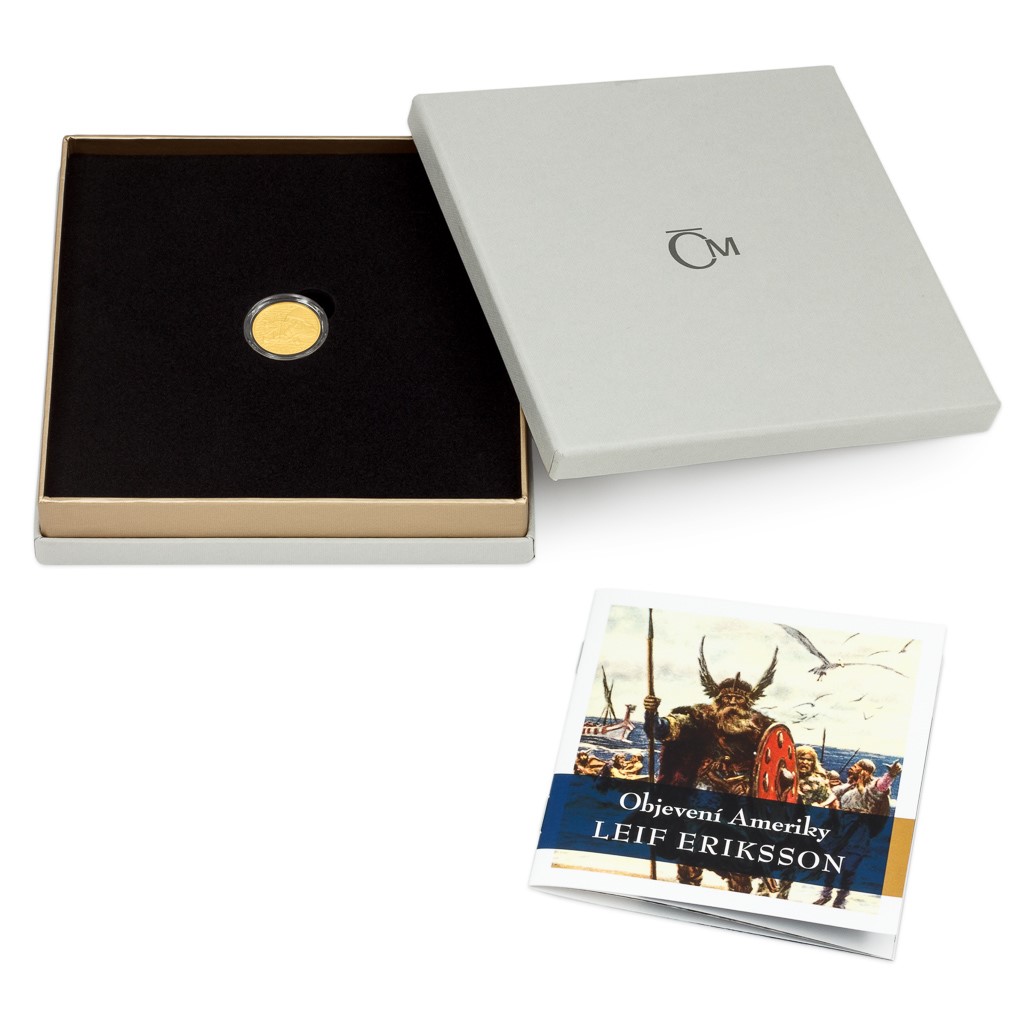 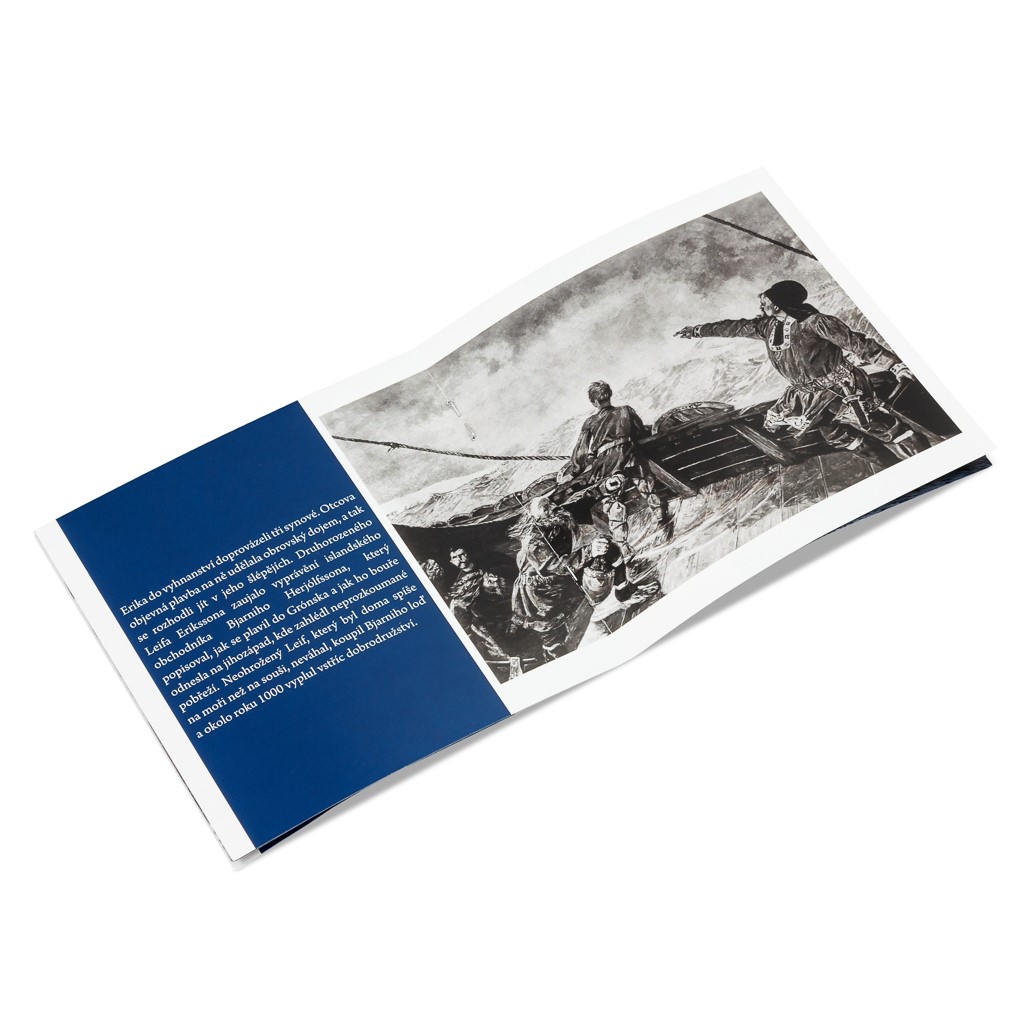 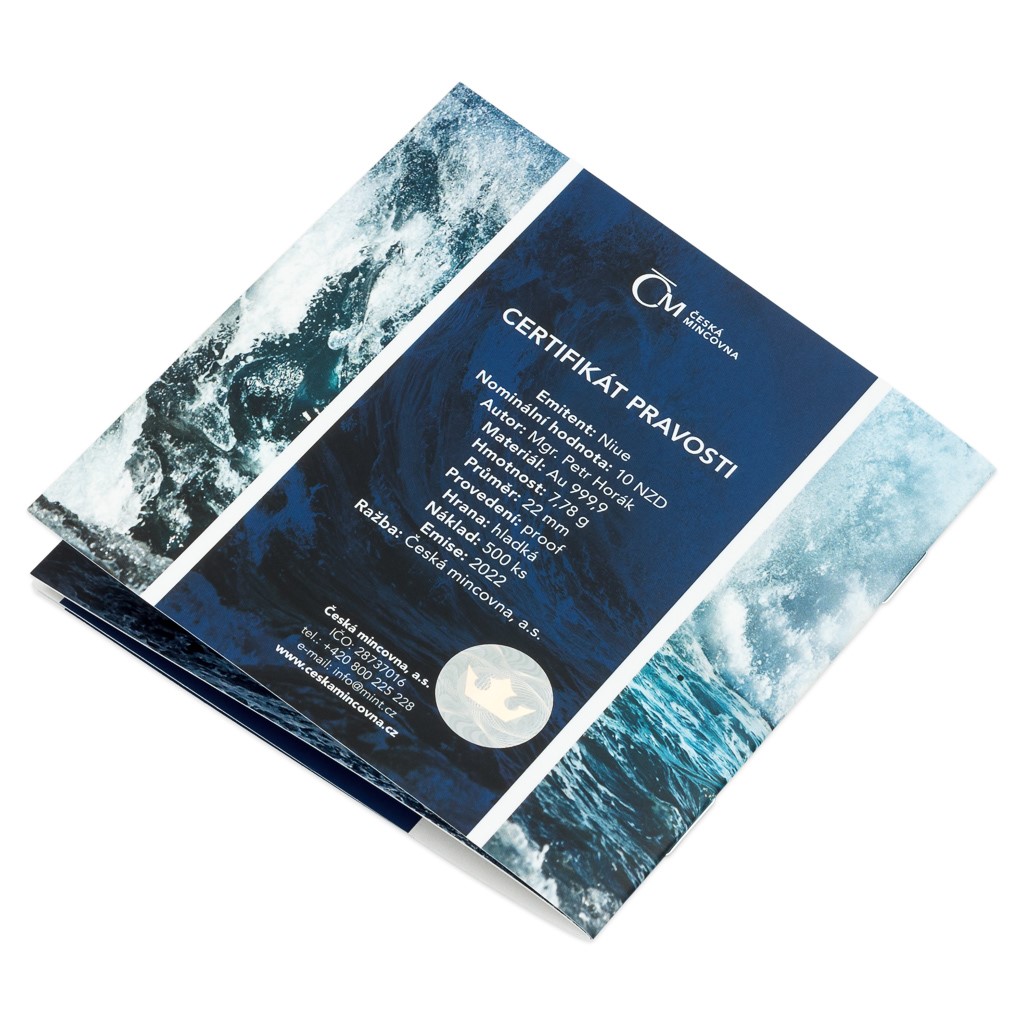 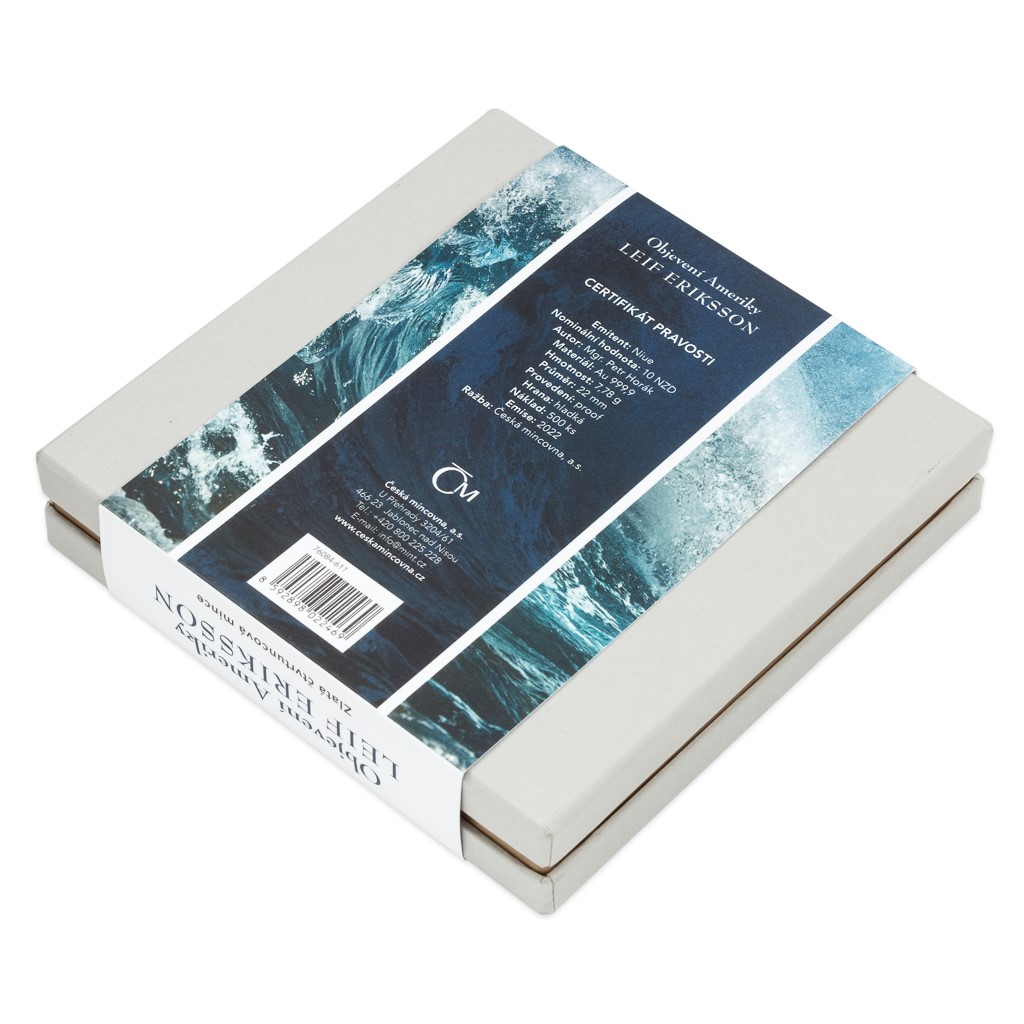 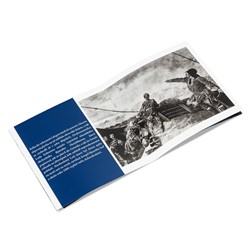 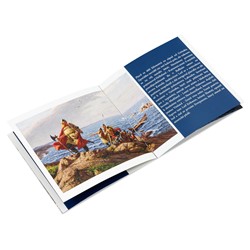 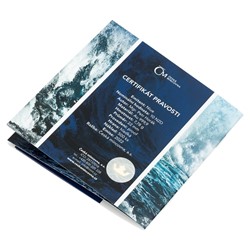 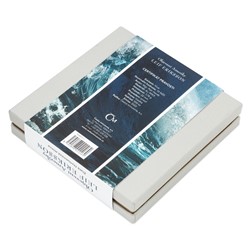