The third motorcycle to appear on the Czech Mint's silver coin from the On Wheels series is the JAWA 350/354 sidecar, nicknamed "Kyvacka".

Motorcycles have long been a means of transport popular among the broad strata of society. They were affordable, but they could not match cars in terms of utility. In an effort to increase their utility, designers came up with various improvements - tandem saddles or two-wheeled sidecars pulled behind the motorcycle, for example - but these were not successful on poor-quality roads. Only special so-called sidecars became a full-fledged solution. The motorcycle and sidecar combination took the form of a two-foot tricycle and was used to transport people and cargo. It was characterised by good stability, not prone to skidding, and provided the passenger with considerable, almost automobile-like comfort. It served families of three as well as small businessmen, and was also well suited to the military. As time went on, however, sidecars slowly but surely dwindled. Increasingly, the view was expressed that the sidecar actually combined the disadvantages of both motorcycle and automobile - namely, that it did not protect against inclement weather or impact, and was neither agile nor portable. Nevertheless, production of sidecars continued in Czechoslovakia and their new era began in 1957. At that time, the Velorex People's Cooperative was entrusted with the production of sidecars for motorcycles of the so-called Jednotna series. The strongest representative of the Unified Series was the JAWA 350/354, produced between 1954 and 1962, which was not only powerful and reliable, but also elegant - in red with gold lines, with chrome fishnets, an ammeter set into the tank and a guitar-type saddle. The distinctive feature of the motorcycle was the rear swingarm, which the previous types did not have and which earned it the nickname Kyvacka. The excellent design of the machine was evidenced by its huge commercial success at home and abroad. The Kyvacka range is still in use after more than half a century and some of them still boast stylish sidecars...

The author of the commemorative coin is MgA. Martin Dašek, who is not only an expert medal maker, but also a great lover of historic motorcycles. The faithful depiction of the Kyvacka on the reverse side is accompanied by an inscription of the JAWA 350/354 SIDECAR VELOREX and a detail of the speedometer with the JAWA ČZ logo. As the coins of the Czech Mint are issued with the license of a foreign issuer, which is the island of Niue, the obverse side bears its necessary elements - the portrait and name of Queen Elizabeth II, the nominal value of 1 DOLLAR (NZD) and the year of issue 2021. Following the name of the collector's cycle, the perimeter of the obverse is formed by the sections of the wheels of various means of transport.

The coin is housed in a spectacular packaging that includes accompanying text and period photographs. Remember that you can store your collection of means of transport in quarters in practical collector's boxes, which you can also find in the offer of the Czech Mint. 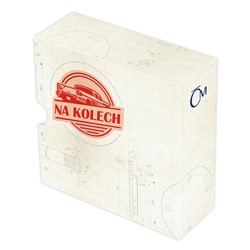 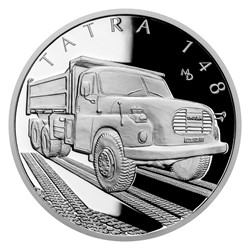